Cherry pie in winter: a slice of summer on your plate. If you've never even considered trying your hand at preserving your own food, I hope this example of deliciousness gets you thinking about it. For just a minute or so. You can go back to your 21st Century life after that. 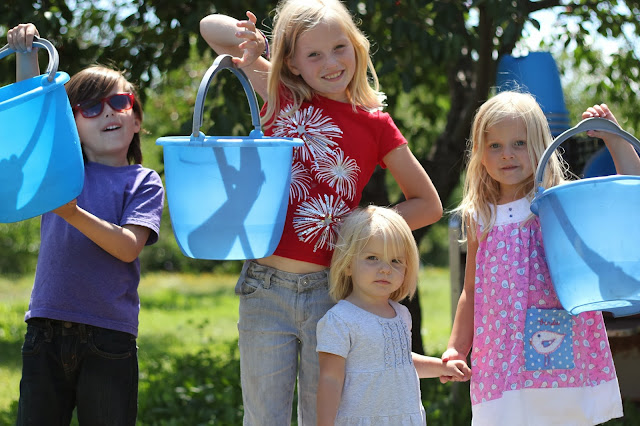 During our recent match with the Polar Vortex (or, what our grandparents would have simply called "The Winter Season") I found myself perusing my collection of digital memories from last summer. You can imagine the draw they had for me.  I ran across these little gems from cherry picking time on Old Mission Peninsula, Michigan (or, what my grandmother called "The Most Beautiful Place on Earth." Actually, I don't know if she called it that, but I do know she loved Old Mission).  The pictures made me make a pie. The pie made me eat it. I do not regret one moment of the experience. 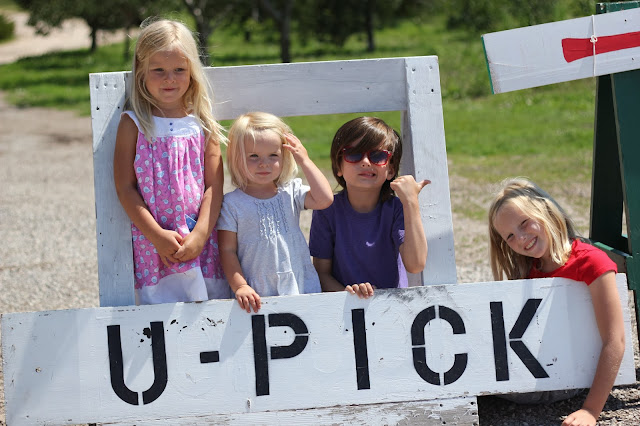 Here's a step-by-step.
1. Find some cute kids. I happened to have some of my own sitting in the back seat, along with a handsome nephew with an extra dose of personality.
2. Convince them that picking produce is fun. For children with an overly-enthusiastic gardener for a father, this may be a test of your powers of persuasion. Remind them that they have never tried picking these fruits before. 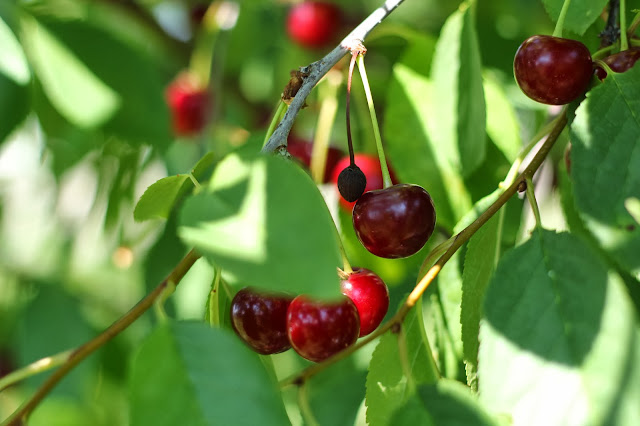 3. Set them loose in a grove of cherry trees. Do not give them axes. Do not tell them stories about George Washington. 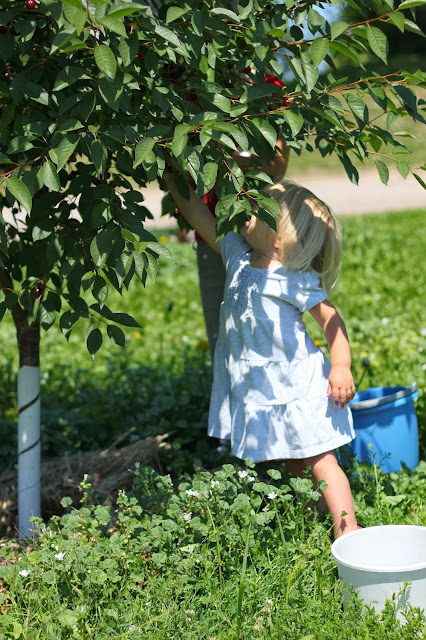 4. Bring the cherries home.
5. Wash them under running water. Do not use soap.
6. Eat as many as you'd like. Even though they're not "sweet" cherries, we think they're still pretty yummy.
7. Don't eat the pits. Alternatively, don't break your teeth on the pits.
8. Remove the pits from the cherries you don't plan on eating fresh. Say, "This is the pits!" loudly until someone in the room laughs. It may take several tries to get the correct response. Don't give up. For pitting purposes, I recommend that you use one of these:
Or one of these:


The fancy-schmancy one comes with German instructions, so you can feel very frau-like.
9. Place pitted cherries in a plastic zipper-topped bag, gently squeezing to remove as much air as possible before sealing the bag.
10. Using a permanent marker, scribble the date on the bag. Toss it in the freezer and forget about it until January when you might need a reminder that Summer is for Real.
11. Come January (or earlier, if you like) grab the baggie from freezer, scratch off enough frost to determine that it contains cherries. Thaw a tiny bit on the counter or in the fridge. (This means just leave it alone while the relative warmth of your kitchen works its magic on the frozen fruit. In the deep throes of a polar vortex, you may wait a while for your kitchen to be "warm.")
12. Bake cherry-themed dessert of your choice. I recommend pie because it's from heaven. If you think you don't like cherry pie, it's probably because you've never had it made from cherries you picked yourself in the height of summer. It's the real stuff. 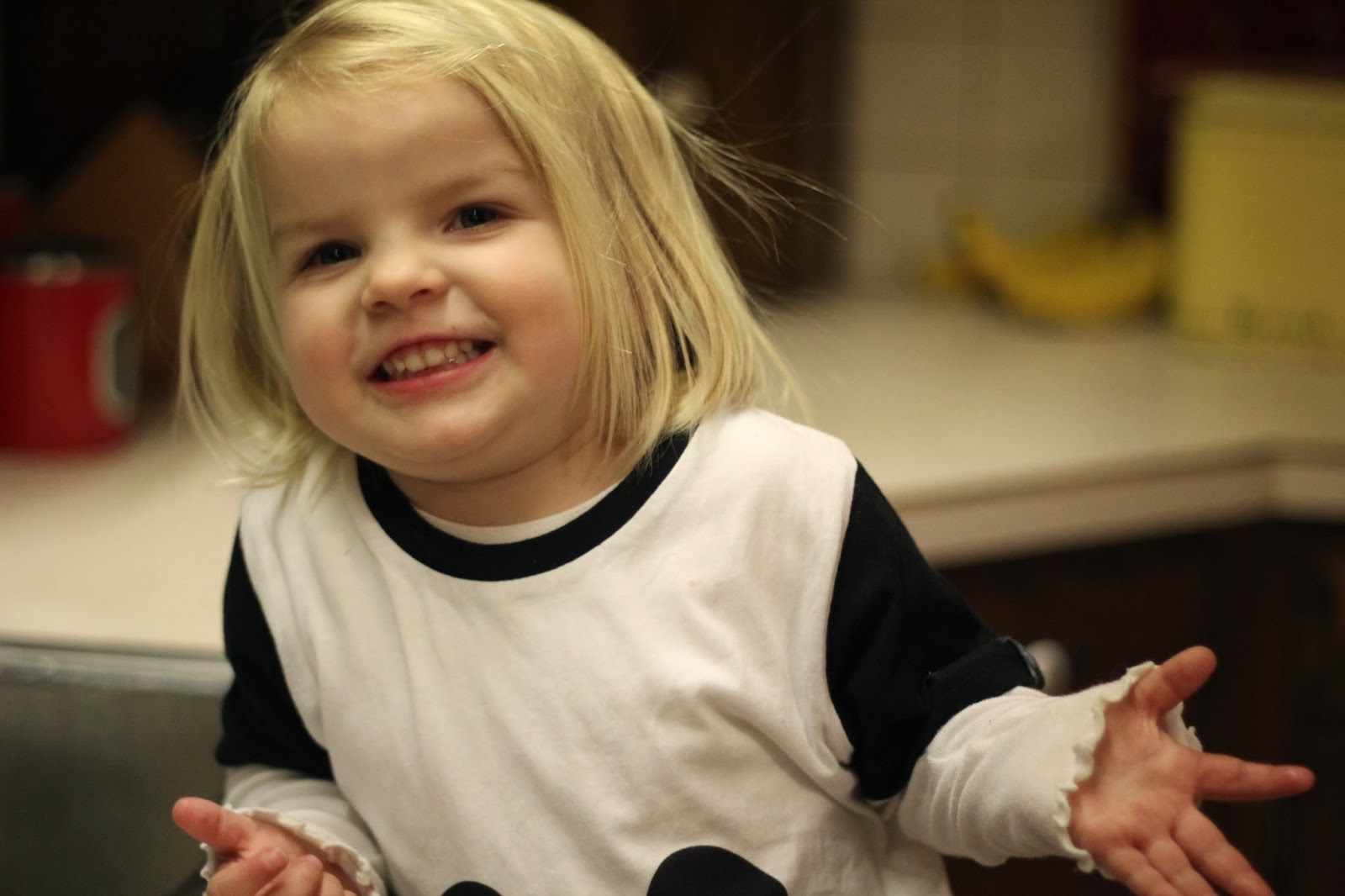 Why aren't you eating real stuff?

P.S. - I don't usually make my own pie crust because I'm not as good at it as the people at Pillsbury. I still feel like a champ; A Pie Eating Champ.
P.P.S. - Leftover fruit pie for breakfast is practically health food. I promise.
P.P.P.S. - My husband thought he didn't like cherry pie, but that's because he doesn't like that stuff that comes in a can. He changed his mind and helped me eat the leftovers for breakfast. It was worth getting up before the kids.