It is raining here. And leaking here.  And so much not feeling the Christmas season here.

I was talking to a friend yesterday about Christmas.  "It's up to moms to make Christmas happen," she said.  She's right.  Who shops, wraps, bakes, addresses, crafts, decorates, and remembers the hard-to-give-to people?  The Mom.

This Mom needs some help.
I feel overwhelmed, and I picture my brain as one of those grabbing booths with little slips of paper swirling out of control.

On each slip of paper is a task that I must complete to make Christmas happen for our family.  Christmas Card Pictures. Wrap Teacher Gifts. Sew Children's Stockings. Decorate House. Shop for Gifts. Bake Cookies. Pick out "Christmas Outfits" for children.  Am I missing something?  Oh yes. Jesus.  What do all these Christmas things have to do with Him?  I usually love this time of year, but right now I'm beginning to feel grinchy... and what kind of attitude is that for celebrating Emmanuel, the most amazing event in all of history?
﻿
﻿

My prayer this morning (and yes, for the rest of my life, but let's get through this morning first, OK people?) is that I will have wisdom and courage to discern what really needs to be done, and what can be done away with.
Maybe I can get it all done.
Maybe I don't need to.
I cannot allow "making" Christmas to ruin Christmas for my family.

And Now... I need to figure out what to do about the leaky window and the flooded basement.  Oh yes, the basement: where all my sewing stuff lives.
﻿﻿﻿﻿
Posted by Honour at 8:40 AM 1 comment:

Without Being Too Dramatic

Without being too
Dra-ma-tic
I wish I could take
My pain and
Make money with it.

Others write of love
And then loss,
Angry dreams tossed
And burned,
Masses pay to cry.

Set my tears to song
You will find
They mean so much more
To someone
Who does not know me.

But then there is the problem of the chorus and rhymes and describing how your belly feels full of unbaked dough: squishy, fermenting and burbling.  But it's just from being sad because no one is baking in this house today. 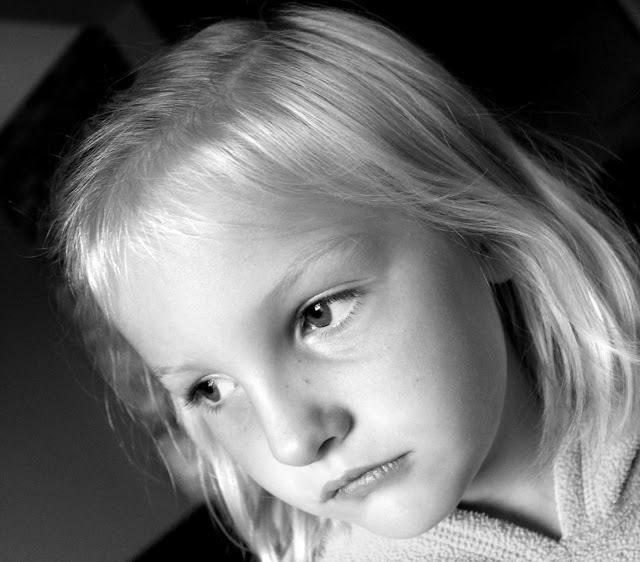 Look For The Lesson (while I finish my coffee)

I love it.
Sorta.  Their version of "church" is pretty loud for the living room.

And now Pastor W. is reading Scripture. I do not think they would sit so quietly if I was the pastor.

And now the children were just dismissed for Sunday School.  Who is left in the congregation?

I so badly want to sneak in there to snap a picture, but then you know that they'd stop.  Just imagine the joys of a toy microphone and the Spiritual blessings it can bring. ;)

Hmmm... that canned applause track adds an interesting element to church.  There's a lesson in that, but I haven't finished my coffee yet, so I don't know if I can quite explore it fully.  I do know that I'd like a little device to add applause through out my day.

Perfection is the four-lane highway on the guilt trip of motherhood.
Anyone who's read my stuff before knows that I am not perfect in any of these aspects.  Really not perfect. Some days, I'm determined that my imperfections will not keep me from joy.  Some days I do allow my imperfections (and those of people around me) to keep me from joy.  Some days I forget I'm not perfect, and I actually do something that impresses myself.  And then my camera reminds me.

See, I made this perfectly cute turkey shirt for GBaby.  Everything about it impressed me: I made it without a real pattern, loosely following an adaptation from one of my mom's sewing patterns from the 70's.  I used only scrap materials, left over from other projects.  I hand-embroidered parts. I even finished the seams and top-stitched it, people!
It fits perfectly.
"Gee, I'm so pleased with myself.  I must be perfect.  I'll take a picture to show everyone that sometimes I do things right. I can almost be a craft blogger (except for that whole I'm-not-a-Mormon part)."

Then.
I realized.
I dropped my camera two weeks ago.  And now it doesn't like to focus. (Anyone want to sell me a lens for cheap?)

Durn.
I was this close to being perfect.

Don't tell me that it's all The Awful Worldly World's fault, because it only has as much influence over me as I allow.  So, what drives my (ugly) desire for perfection? Insecurity? Pride? Control? Painful Memories?
God sees every part of me, the perfect and imperfect.  And still, He loves me.  Amen.  That's enough to be Thankful.  With or without a turkey shirt.

Now, as a bonus reminder, go give a good listen to these two songs from a really great artist.  And be thankful for your imperfections, because they can showcase the enormity of God's love.

Just so you know that I'm not making this imperfect stuff up: I had a really crappy attitude for about 36 hours. You can pray for me (and my poor little family). Thanks.
Posted by Honour at 10:00 AM 1 comment: 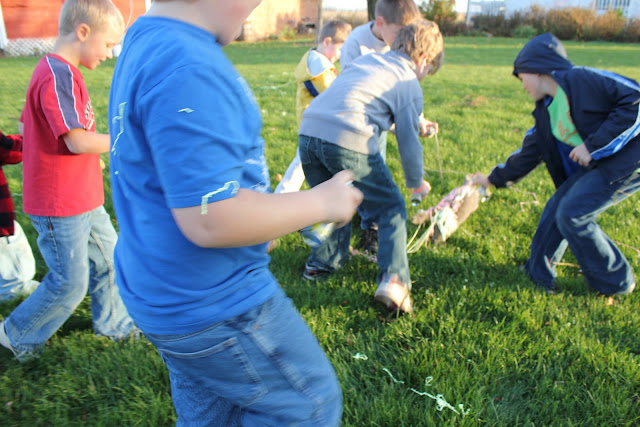 Instead of buying more candy (there was a lot on that cake!) or dollar tree toys, I got each boy a can of silly string.  I hope the other mothers appreciated that it was junk that would get used up at our house and they wouldn't have to deal with it at home. I'm pretty sure the cats did not appreciate my thoughtfulness. But then, cats so rarely do.
﻿ 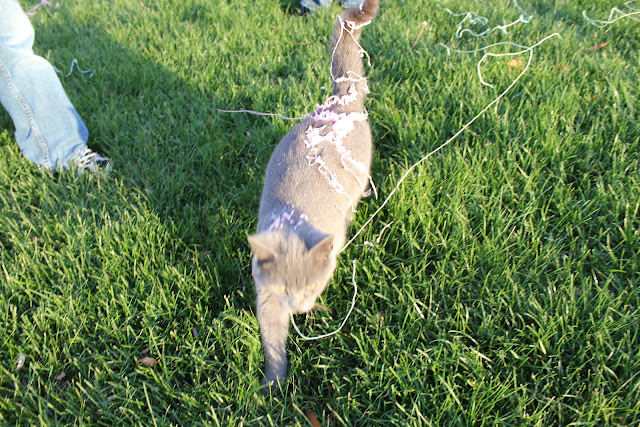 ﻿
After an epic 7 boys vs. adult tug-of-war, a 7 boys vs. cat silly-string fight, an enormous pizza and a very chocolaty movie, it was time to eat the cake!  But wait... it had collapsed even further.  Please note the entirely innocent expression of the guest in the background.  I am certain that he was the pirate that chased us into the storm, but it's all good.  Instead of a pirate ship, this was proclaimed to be the Swiss Family Robinson Cake. Thank goodness for quick-thinking older brothers. 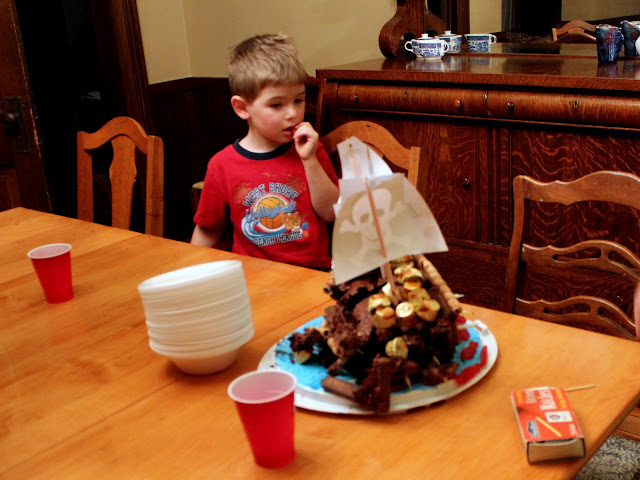 I like to make a big deal about my kid's birthdays. Because, well, my kids are a pretty big deal. 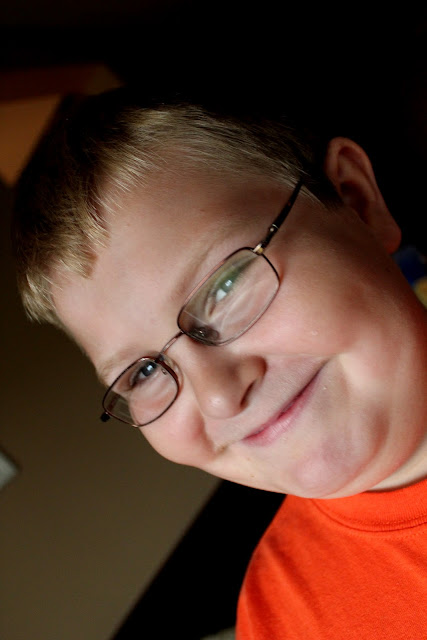 Grown up names and all.
Posted by Honour at 9:00 PM No comments:

Seeking Order in a Haphazard Way

As I reported in my previous post... I had a sick kiddo (or four) on my hands last week. Not fun. Not fun at all.
But not too bad, as sickies go. We have a lot to be thankful for.
Everyone is back on top of the weather.
And what weather we're having.  Thunderstorms? In November?  The booms were so loud the few pictures I actually have on my walls rattled.  Seriously.

This is not what I was going to write about. This distraction-while-typing thing happens to me a lot, even when the kridlets are in bed. Kridlets. I made that word up.  Then I joined urbandictionary.com just so I could add it and try to get a movement going.  The problem is, too many other people are all trying to introduce new words into our vocabulary and they probably get more chances to write because they don't distract themselves with utter nonsense!

WARNING: I'm about to present a picture of everyday life.  It isn't pretty.  Well, except for the serious baby and singing toddler.  Thanks to my Nine-year-old son, we have a permanent record of un-posed life. 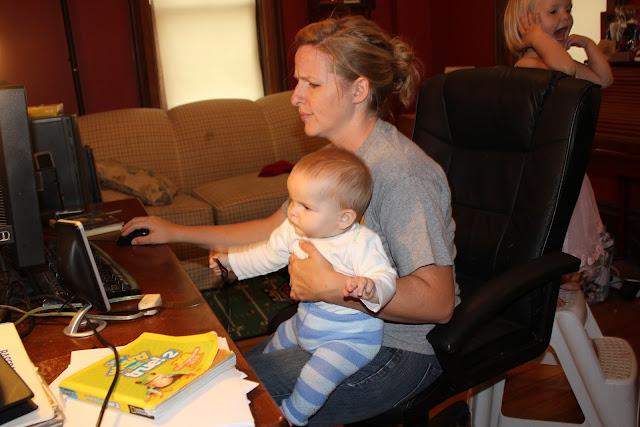 Me: surrounded by chaos and kridlets.
Anyway.

I am finding myself drawn to order and schedule lately, although my housework begs to differ.  But really, I am. Maddened by the "what to fix for dinner" chaos that haunts my 4:30 afternoon, I established a meal chart. Nothing new, nothing fancy, it is certainly nothing original.  But it helps.  That wasn't enough, because soon I found myself frustrated with the "what to put on our meal planning chart" problem.  So I almost-randomly decided that we will always eat specific food on specific days of the week.
Of course, I am without guidance for Tuesday, Friday and Saturday evenings but that's just because I haven't come up with specific foods to assign to those days. I'm sure I will, and I am hoping it involves The Father of My Children making some of his rather famous (at least as far as the kridlets - score extra points - and I are concerned) forays into the kitchen. 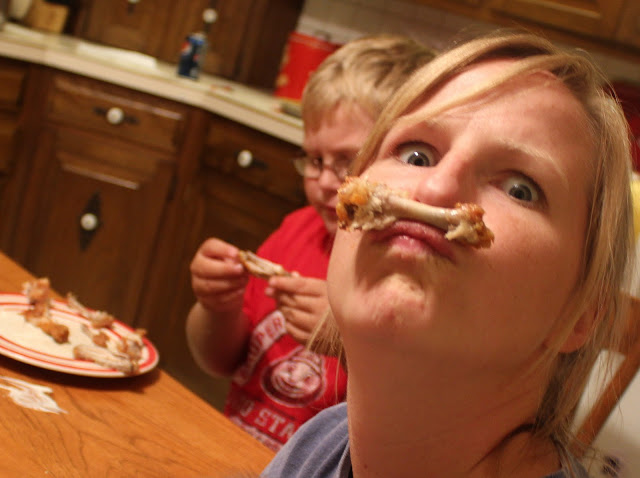 Here we are enjoying his delicious wings. I would never make wings from scratch.  I would have bought them pre-cooked in a bag from the grocer's freezer. But he's much more adventurous than I.


Why am I telling the World Wide Webfolks all this? Well, because. It's Monday night. I've decided that's the night I will write... and not feel one bit guilty about the housework.
Posted by Honour at 9:23 PM 4 comments:

So today I'm not doing what I wanted to.
Sickie-poo baby leaves me sitting with her in my arms.
We're watching youtube videos because it keeps her from crying.
And I resent that my projects were interrupted.
We watch this short music video from an artist I would never had called my favorite.
And now I'm crying.
And now I'm loving every minute "wasted" with my little ones.

Posted by Honour at 2:37 PM No comments:


I just set a timer, giving myself 15 minutes to chirp out a post, so there will be few edits and hardly any connections between thoughts.

Sometimes a ratty old sweater just makes you feel better.  Particularly a cardigan.  Why is slovenliness so emotionally comforting?  Up early, compliments of GBaby, I have "fixed" my hair & makeup before the household gets going.  Because, you know, it is so important to have eyeshadow on before you bake cookies, which is one of my goals for the day.  I've been a little Baker Queen this week.  Muffins, biscuits, bread that is impersonating a brick... I don't know why I have such a hard time with bread.  My dinner rolls are pretty decent.  Anyway, despite the sweater dug out the depths of my bottom drawer, I am wearing my hair curled this morning.  I think it looks like a mash-up of Farrah Fawcett and Nelly Olson.   Really, a great look for 6:45 AAAM.  I think that finger slip signifies Early Morning Greatness:  Amazing Amplified Ante Meridian.  GBaby doesn't have much hair yet, so no curls for her.  She sat at my feet and grunted.  Pretty sure I know what that means.  When the timer goes off I'm on poop duty.  Apparently, there is a world-wide shortage of snot (I'm really sorry about that word, but we're not talking "boogers" people, and I don't know the polite substitution for liquid running from your nose; maybe polite people don't talk about it.) and my head is storing it up for the winter.  This stuffiness should help with the poop duty.  Maybe I should wear a mask while I bake.  Tomorrow night we're having a sleepover to celebrate Sambonio's 8th birthday.  He doesn't like it when I call him Sambonio, so I won't do that in front of his friends.  I am not really excited about it, because a "sleepover" probably means "little boys who will want their moms at 4:00 AM." And not AAAM.  So I'm baking a birthday cake too.  Shaped like a pirate ship.  With candy.  Hmmm... I'm hungry.