Twelve years ago I was an entry-level receptionist, glad to not be a bank teller any more.  I smiled greetings at faces and cheerily answered the phone.  In our "starter" home, Corey and I had just marked our first anniversary.  Although we hadn't figured it yet, our oldest child was due to make an appearance in eight long months.  Life was sunny, easy and filled-to-bursting with promise.

Midway through an bright September morning, planes began to rip through buildings some 600 miles away, and we felt the rattles in our little Midwestern office.  I spent my lunch hour standing in our living room [I can't recall if we actually owned furniture at that point; surely we did, because our house seemed always filled with people] staring at the television. "This is the beginning of an end," I thought as that horrific video footage was endlessly repeated. "Life will never be the same."

That evening, I didn't want to leave the house, but my husband had band practice [he would like me to point out that it was a rock band, not a marching band] planned in a town 45 minutes distant and I wasn't going to stay home alone. I recall driving past gas stations with lines of cars waiting to pay $4 per gallon for fuel.  The day before it had cost around $1.60 per gallon.  What did they know that I didn't? Should we fill up now? Would there be stations open later?
We were scared.
We believed everything and nothing.
We were young.
We were all so very young.

It has been twelve years; an even dozen chunks of a dozen months of a thousand changes.
Our clumsy cell phones have given way to smart devices - tiny computers faster than the one I used as a bubbly receptionist.  Mine sports a calendar filled with soccer schedules and field trip reminders instead of jam sessions and concert dates.  Our house is still always filled with people, but now we have couches and chairs. We need at least a minivan when no one wants to stay at home alone.

Gasoline is still nearly $4 a gallon, and no one seems appalled by that. I think maybe we should be appalled that we're still using fossil fuels. Shouldn't we have found something else to exploit from the earth another form of energy by now?
No one thinks anything of opening your purse for strangers to rummage through when you're trying to enter a stadium.
No one expects to say goodbye at the boarding gate.
No one sends their loved ones away with a guarantee that they'll be home in one piece at the end of the day.
No one really knows how to bring about an end to the strife that shreds humanity.
I feel old.
This world feels old.
This world feels groaning old.

Really, life is the same as it always has been.
We humans have long excelled at injustice and hatred. A violent way of life is not a new way of life; we have always wrestled among ourselves in this world.  Scour the pages of history and tell me of one civilization that endured in lasting peace. There is no holy nation upon this earth.

Even in the face of injustice, there are some who do what is right.  For every violent news story I read, I can find gentle soul living in everyday kindness. There are still hearts filled with love, even in the face of hatred. I believe that in the darkest places on earth one can yet find hopeful glimmers of goodness.  Maybe the hatred is bigger than it was twelve years ago, maybe it screams louder.  Or, maybe we pay it more attention than we did before.
The world after September 11, 2001 is broken; but the world was broken long before that bright cloudless morning in Manhattan.
Now, as before, there is hope, but it is not found in the regimes of the nations. This hope soars beyond boarders, and unites our hearts in a stronger bond than mere patriotism.

For people who speak thus make it clear that they are seeking a homeland. If they had been thinking of that land from which they had gone out, they would have had opportunity to return. But as it is, they desire a better country, that is, a heavenly one. Therefore God is not ashamed to be called their God, for he has prepared for them a city. [Hebrews 11:14b-16, ESV]

It is true that in the last dozen years I have become less patriotic, less trusting of the world's leaders.  I simply do not think that {collectively} people are good enough to solve the problems that {collectively} they create. But I have great aspirations for individuals.  One person at a time; that is how change is most effectively wrought.
I cannot transform the world, I can only be one seeking justice, loving mercy and walking in humility, shining as best I can on this dark and broken planet. Hoping. Trusting in Something better.

A Girl and Her Cake

I was working on a post about "letting go" but it was boring.

I would much rather talk about cake. Specifically, the Birthday variety.  I have always been a great believer in Birthday cakes, and I believe that really influenced our decision to have so many children.  Just kidding. There was no decision or action taken on our part; the kids just happened. I promise, mom.
Anyway, having a houseful of children tends to ensure that there will always be plenty of birthday cake. Or at least, plenty of anticipation of birthday cake.
That's the problem: anticipation.
I get ideas about birthday cake that are way beyond my skill set, but just under my fluctuating levels of self-confidence.  To make things better, I often involve my children (you know, those Birthday people) in the cake idea session.  Pre-celebration, I don't seem to think anything is out of reach. Yes! I can make a princess-dragon-pirate-rocket birthday cake! Can't everyone?
Post-celebration, I remember why I hate Pinterest and internet moms everywhere.
Post-post-celebration, I just laugh at myself.
A couple of years ago, inspired by the movie Tangled my oldest daughter asked for a "Rapunzel's Tower" cake. Accepting the challenge, I Googled out this idea. Please, by all means, click on the link. What you'll see bears very little resemblance to what we had going on. Homemade frosting doesn't like late summer, I guess.

The following year, with greatly lowered expectations, she asked for a simple "pretty cake."  Even that, apparently, is beyond my abilities.  What we had was more than edible, but a bit on the ugly side.


This year she just made her own cake.  It wouldn't come out of the pan in one piece, so that really simplified the frosting effort. I think we were both happier.  I mean, what eight-year-old doesn't want to make their own birthday cake and get chocolate batter all over the kitchen and repeatedly lick the frosting spatula and decorate with paper umbrellas?  We're talking paradise, people. Childhood paradise, that's what we have going on around here. 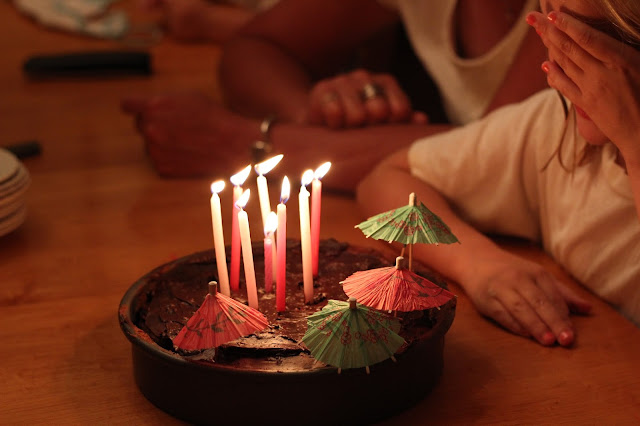 We're not professionals; we're just having fun.  That doesn't require much anticipation or skill.