I fear that I may have a bit of a divided self.
But it's not entirely my fault.  It all started with Pinterest and it's pervasive culture of glossy DIY perfection.

After stating yesterday that I was thinking about the upcoming Holidays, I ventured over to my long abandoned Pinterest account and started searching out ideas for "handmade Christmas c..." I didn't even need to fill in the rest of the word before Pinterest knew what I wanted. It filled my brain with visions of mason jars and cranberries and their endless possibilities. I saw crafts and cookies of impossible adorableness. I "pinned" with wild abandon, knowing full well that I will make few or none of these suggested delicacies.  I am convinced that these pictures are brought to the world wide webs by Professional Martha Stewart Mothers seeking to bolster their own papier mâché self esteem.  "Look what I can do, with only 5 minutes of "me" time and 5 nickels' worth of supplies!" They don't tell you that it took 20 times practicing for that one perfect result. You don't expect failure, but that's what you get. Be warned, parents and teachers everywhere. The shiny, hazy or brilliantly white background-ed  pictures are not the stuff of everyday goodness. They are the stuff of failed dreams and hot glue burns.

I know this failure.  This failure and I are long-acquainted. We have coffee together maybe a little too much.
And even though I felt that I was treading softly, oh-so-carefully picking my way through the mine field of over-ambitious ideas and ideals, I still was sucked in. My (perceived) ability was amplified.
Later that morning, I went to the local resale shop, because every single pinner knows that the new basic craft supplies are actually someone else's old junk. 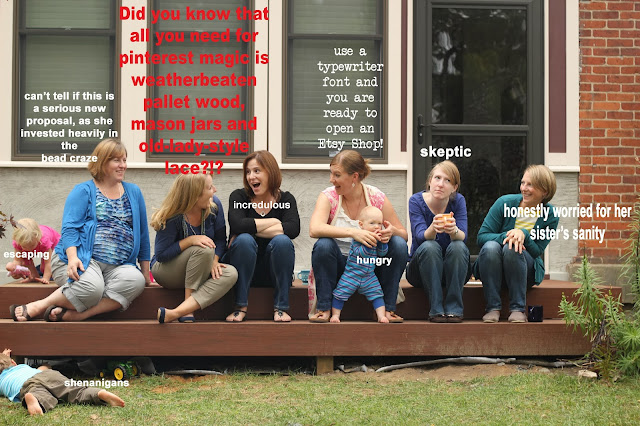 First I hit up the house ware (how is that not all one word?) section of our little town's little thrifty store, Care & Share.  I found old lady fabric, old lady buttons, an old gallon-sized glass jar (not quite mason, but we'll pretend), an old little old pitcher, and - my favorite - old crocheted Christmas ornaments that are way cooler than they sound.
I felt pretty nifty and hipster-like to have obtained all that project-ready vintage stuff, so I decided to check out the clothing section.  Have you seen the things people make out of felted sweaters? With this idea in mind, I browsed the round rack of sweaters.  And then somehow, I found myself trying on pants. As in, I was putting my body in trousers that once belonged to someone else.  My Pinterest-Optimistic self found herself arguing with the Realistic Pessimist in my head.


Pinterest-Optimist: "Hey, these fit pretty nice, and I don't see anything wrong with them."

Realistic Pessimist: "Well then, why someone would be throwing them out? Are they possibly out of style? Am I so out of style that I don't know what is "in" anymore?"

Pinterest-Optimist:  "Surely not.  Maybe whoever owned these simply didn't fit into them anymore. Maybe they'd gained so much weight that they couldn't fasten the buttons any longer."

Realistic Pessimist: "Or maybe they'd lost so much weight that the garment just fell right off of them.  Does that make me the fatty?"

Pinterest-Optimist: "Why does food look so good?

Pinterest-Optimist: "Let's just accept that I have a maturing body."

Realistic Pessimist: "Sure. But could I ever wear those pants in public? Their former owner will probably recognize them. This is a pretty small town."

Pinterest-Optimist: "Shut up. They're three dollars."

Realistic Pessimist: "You know you're going to end up wearing those sweaters too. They'll never be re-purposed into cute little animals."

Pinterest-Optimist: "This is hysterical. You should write a blog post about my second-hand finds."

Realistic Pessimist: "Good thing you have such low blog readership, otherwise all our friends will be checking out my every outfit to see if you've been buying up their old junk."

Pinterest-Optimist: "Shut up. This is what hipsters do."

Realistic Pessimist: "Wear clothes from someone else's closet? No. That's what little sisters do."


At this point the optimist and pessimist merged back into the mother whose two year old had escaped under the dressing room door and the pointless bantering within came to an abrupt end as we I went to find her.

Did I buy the trousers? The PinterPessimist has decided not to answer that. And she's made her current board, Christmas Ideas 2013, a "secret board." She will most definitely find a spot on her undersized tiny live Christmas tree for the crocheted ornaments that are still way cooler than they sound.  And if she finds herself putting any other second-hand purchases to Pinterest-inspired purposes, she will try to let her readership (hi, mom and dad!) know every detail of the project, fumbles and all.
But, let's be realistic: I'm really lousy at keeping up with my good in[ternet]tentions, be they blogging or crafting.
And I'm really OK with that.
I think.
Posted by Honour at 4:26 PM