A Matter of Ancestory

Today became other than I planned; my to-do list is largely unchecked, but I watched loads of British Period Drama and held my three-month-old niece for hours. I would say these were changes for the better.
Babies & BBC > Housework. Everyday.

Today also included a few minutes of definite hausfrau-ness. I'm all for feeling my UK heritage every chance I get, especially when those chances involve shortbread. But when you're out striding through fallen leaves in a pair of rubber boots, breathing deep lung-fulls of crisp air, headed to the late-producing vegetable patch to harvest some carrots and greens... well, that isn't a time for dainty dreams of English tea parties. That, my dear friends, is when you pretend your name is Marta Frieda Berta and you hike up your imaginary skirts with your work-worn hands and attack vork vit many vigors.

It's great to be German on a fall morning.
Just ask these Ruffer girls. 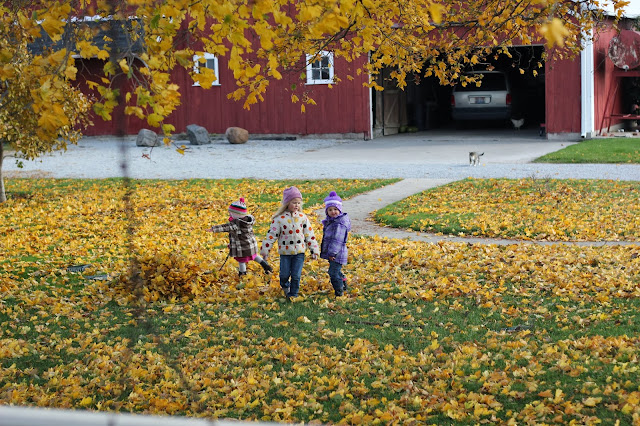 You have never seen a prim little Anglo-Saxon girl tackle a spread of leaves with the enthusiasm mustered by these daughters of the Deutschland.
I know it looks like the girl in the polka-dots was about to assail her cousin and sister with that rake, but please accept my assurances that I would never have merely taken pictures while that happened. I know the powerful swing of which this Germanic kinder is capable.  She looks like she was turning her plowshare rake into a sword club, but I do not think that was the case... 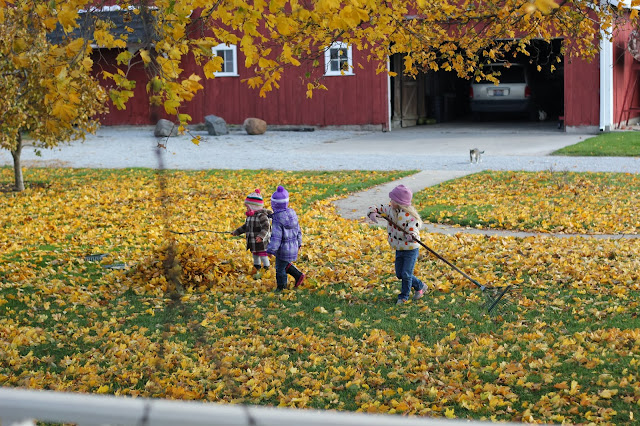 Of course, I'm not too sure, as immediately after snapping these photos I was reminded by the infant cradled in my [non-camera] arm that we had an appointment with some rather stuffy characters in long skirts and veiled hats. And there was also some shortbread hidden in the cupboard...
One can only handle so much hausfrau in one's life. Eventually, one must stop play-acting.  One must listen to the British accented voice in one's head. In the end, one does have roots beyond the sort in the vegetable patch, and afternoons (of any season) are made better by ancestors of the British Isles.


Let us not lose sight of who was on the winning and losing sides of both World Wars.
Posted by Honour at 10:05 PM